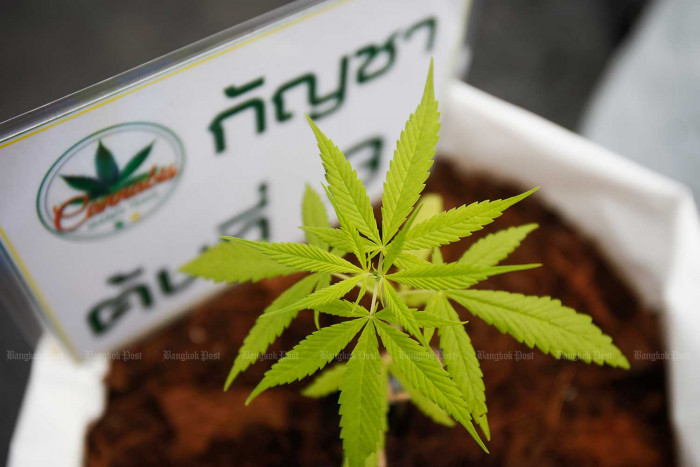 A Public Health Ministry’s Narcotics Control Committee on Wednesday postponed a meeting to consider the proposed removal of cannabis from the narcotics list. It was called again for Thursday.

Deputy Prime Minister and Health Minister Anutin Charnvirakul gave no reason for the postponement. Mr Anutin previously said a subcommittee on narcotics had revised the narcotics list, which no longer includes cannabis as a category 5 narcotic. This will pave the way for households to grow the plant legally.

The draft list was originally due to be reviewed by the Drug Control Committee, chaired by Secretary of State for Public Health Kiattiphum Wongrajit, on Wednesday. Once approved, it will be forwarded to the Narcotics Control Board chaired by Deputy Prime Minister Wissanu Krea-ngam. The revised list is in line with the new Narcotics Law, which came into force in December last year, Mr Anutin said.

Growers must notify authorities rather than seek a permit for each cannabis plant they wish to grow for domestic use, he said.

However, he said that breeders still need to obtain a permit if they produce cannabis products or cannabis extracts that need to contain less than 0.2% tetrahydrocannabinol (THC) by weight. The cannabis must also be grown locally.

Legalizing cannabis so that households can grow up to six plants was a key campaign promise made by the Bhumjaithai party during the 2019 general election. The party was criticized for not delivering on its promise despite overseeing the health ministry for three years.

On Monday, a Health Ministry committee on the liberalization of medicinal cannabis met to discuss legalizing the plant, chaired by Anantchai Assawamekin, an adviser to the minister.

Mr Anantchai said the meeting attracted 252 stakeholders including herbal medicine companies. They agreed that measures must be developed to prevent imports of cannabis and hemp from affecting small domestic producers. He said the ministry supported removing cannabis from the list, leaving only THC on the list.

CPG companies remain wallflowers in the cannabis market this year

Tips for those entering into a cannabis business agreement