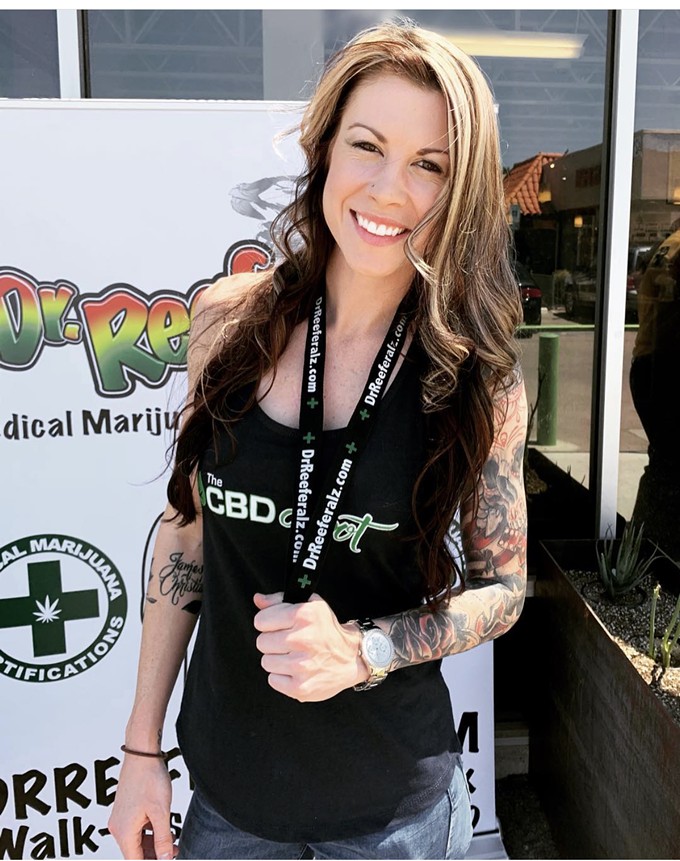 Local institutions of higher learning are about to start the first fall semester since the advent of legal adult-use, recreational cannabis in the state of Arizona.

But don’t break out the party bowls just yet, as there are still prohibitions related to possession and use on campus because of conflicting state and federal laws.

“What students should probably understand is that, yes, you’re allowed to grow a few plants, but you’re probably not allowed to do it in a dorm,” Downtown and D2 dispensaries owner Moe Asnani said. “They might think, ‘It sounds like I can grow some plants.’ Yes, but not on a federally funded school property. It’s the little things like that, I think, that’s important for them to understand.”

Despite legalization for medical uses in 36 states and for adult-use recreational in 18 (plus the District of Columbia), weed is still listed as a Schedule I narcotic by the U.S. government, meaning it has no “currently accepted medical use in the United States, a lack of accepted safety for use under medical supervision, and a high potential for abuse.” Other drugs on that list include heroin, LSD, peyote, methaqualone and methylenedioxymethamphetamine (ecstasy, or MDMA).

The University of Arizona student code of conduct defines “controlled substance” as a “drug or substance whose use, possession, or distribution is controlled under state or federal law.”

As a university that accepts federal funding, UA follows federal guidelines and prohibits “the unauthorized use, sale, possession or distribution of any controlled substance or illegal drug or possession of drug paraphernalia that would violate the law.”

Students caught with the drug are subject to sanctions “intended to be educational in nature, protective of the community, and relevant to the case.”

Punishment for a first-time violation can include parental notification, a “personal responsibility” education course, “personal reflection or community service, and deferred eviction for students living on campus,” and remains on the student’s education record for five years or until graduation.

Further punishment may include suspension from the college, expulsion, degree revocations or “other sanctions permissible under existing university rules.”

Pima Community College has its own rules prohibiting pot, outlined in its 2020-2021 Drug- and Alcohol-Free Environment Notification that complies with federal regulations in the Workplace Act of 1988 and the Drug-Free Schools and Communities Act.

Violations of those laws can lead to “imprisonment, fine, probation, and/or assigned community service. Students convicted of a drug- and/or alcohol-related offense will be ineligible to receive federally funded or subsidized grants, loans, scholarships, or employment.”

Section 4 of the Notification, “PCC Statement on Medical Marijuana,” clarifies campus policy, pointing out that state drug laws, even those protecting patients, are trumped by federal regulation.

While the 2010 Arizona Medical Marijuana Act authorizes possession and use for qualified patients, AMMA also “expressly prohibits the use or possession of marijuana on the campus of any public university, college, or community college, even by registered medical marijuana cardholders.”

“Federal law requires us to prohibit possession on campus and supersedes state law,” PCC spokesperson Libby Howell said. “If our campus police caught someone in violation, [the student] would be referred for a Student Code of Conduct violation.”

For small violations, students would face “disciplinary sanctions and possible criminal action even if they are registered medical marijuana cardholders,” according to policy, but Howell said actions such as arrest or expulsion are reserved for acts of violence or repeated offenses.

“Realistically, we’d only know [if a student possessed cannabis] if they were showing signs of impairment” she said.

On the bright side, because of an Arizona Supreme Court decision in 2018, students would not face immediate felony prosecution and the schools would deal with low-level offenses internally if a student with a valid medical card was caught with a reasonable amount of weed and no extenuating circumstances.

The case leading to the Court came about in 2015, when ASU student Andre Maestas was arrested for unusual behavior on campus. He was sitting in the middle of the road in a “disoriented” state, according to arresting officers.

Maestas had a valid MMJ card, which led to a search of his dorm room that uncovered about a joint’s worth of cannabis in his possession. The student was charged with a felony under a 2012 law that made it a felony to possess any amount of cannabis on a college campus.

A lower court determined that the 2012 state statute, signed into law by former governor Jan Brewer, violated the Voter Protection Act of 1998, which requires a three-quarters legislative vote to change a voter initiative and only if it “furthers the intent of the law.” In 2018 the Arizona Supreme Court determined the law did not further the intent and upheld the prior decision.

The felony was reduced to a misdemeanor, and eventually dropped, but because Maestas took a stand to defend himself, possession does not automatically mean arrests and legal hassles for pot-loving students.

Patients cannot consume cannabis in private or public on campus though, and students are expected to follow the Arizona Board of Regents code of conduct, which includes prohibitions against possession and use of controlled substances.

Maestas eventually graduated with a 3.13 GPA and took his diploma into a high-tech programming job, according to contemporary reports.

The advantages of medical certification

The AMMA was passed by Arizona voters in 2010 and offers significant advantages over adult-use recreational pot. There are anti-discrimination provision to protect employees, renters and homeowners, as well as students, and cardholders can possess larger quantities of weed.

Plus—and this is an important loophole for college students—a medical marijuana card allows you to purchase cannabis if you’re between the ages of 18 and 21.

Arizona cannabis attorney Tom Dean says college students, especially those who live in dorms, are among the three categories of Arizona residents who may want to consider keeping their MMJ cards. (The other two categories are employees subject to drug testing and parents of minor children.)

MMJ patients can possess up to 2.5 ounces of leaf and unlimited edibles with no limit on THC content. They can also grow up to 12 plants if they live more than 25 miles from the nearest dispensary.

The tax rate on medical cannabis includes a 6% sales tax along with a 2% to 3% local sales tax, depending on municipality.

Prop 207, which passed in November 2020, legalizes possession of up to an ounce for adults over the age of 21 and allows growing up to six plants and possession of up to five grams of concentrates at any one time. It also places a limit on the THC content of edibles of 10mg per piece and 100mg per package.

Additionally, there is a 16% sales tax on recreational weed along with local taxes, so you get a big tax break if you invest in a medical card.

“If patients go to www.drreeferalz.com they can find an app on our site to calculate how much they purchase in a month, and it’ll show what a recreational customer would pay [versus] what a medical patient would pay,” Dr. Reeferalz Arizona Operating Manager Taryn Tia said. “It puts things in perspective, because you can save a lot by just having a medical card.”

Dr. Reeferalz has five certification clinics in the Phoenix area and one in Tucson, located at 4120 E. Speedway Blvd.

The medical referral business has been rocked in the past year, in the wake of the state of Arizona extending the life of a MMJ certification to two years. While the advent of legal weed has not helped, a kind of equilibrium is coming in the industry as marijuana users who qualify as patients learn the advantages of the medical program.

“When you have a medical card, you’re protected,” Tia said. “You never know what could end up transpiring, so there’s a lot of benefits. The medical side is definitely a really good side of it.”

Dr. Reeferalz offers discounts to veterans, seniors and students. The state fee for a cannabis card is $150 for two years and there is a $50 examination cost, but in the long run—particularly for heavy cannabis users—the economics favor the MMJ side.

As more and more states liberalize marijuana laws, the industry has seen huge increases in economic activity and tax revenue generation, despite legitimate marijuana businesses not having full access to banking services, funding sources or markets in other states.

The war on drugs continues to hamper economic growth, as Reagan-era tax laws have put the cannabis industry at a disadvantage through draconian tax laws that don’t allow business some of the advantages other sectors enjoy. The cannabis industry is also trapped by state boundaries that preclude interstate commerce and hamper economics of scale that could cut operational costs.

The Arizona Department of Revenue collected $74,386,952 in total marijuana tax revenue between the advent of adult-use recreational sales in January to the end of June, according to the Arizona Department of Revenue. That breaks down to nearly $25 million from medical card holders and roughly $49.5 million from recreational sales.

The state is poised to collect more than $150 million in taxes from an industry that is on track to sell more than $1 billion worth of cannabis in 2021, with the new adult-use market doubling sales around the state. That adds up to an average of $120 million in monthly sales of cannabis, both medicinal and recreational.

The market will likely top $2 billion annually after the recreational program reaches maturity in about three years. At that point, the state is expected to rake in approximately $183 million annually from taxes on legal pot sales, according to the Tax Foundation, a nonprofit fiscal analysis organization.

Legal cannabis sales across the nation have increased dramatically, given the wave of legalization in what is now a majority of states.

Cannabis is the nation’s fastest-growing industry, given that in 2020 sales revenue increased roughly 60% over 2019.

The local pot business, like most other businesses in the Tucson area, has been gearing up for the return of both college students and winter visitors (AKA snowbirds), particularly after the economic ravages of the pandemic.

“We are much busier during the months when the university is in session, including the community colleges,” Downtown’s Asnani said. “But it’s not just students, it’s also staff and faculty and everything else that comes with the administration of an entity like a university.”

This year is especially auspicious for Downtown Dispensary, as Aug. 20 will be the eighth anniversary of the opening of the business. There will be in-house specials and Asnani plans the gradual rollout of several new lines of products, including quality chocolates created with equipment imported from Europe.

“We have a ton of new products coming out, such as iLava Molecular, which is our live resin line of cartridges,” he said. “We’re going to have about 16 of them launching in September with multiple vape products as well as gummies that have CBD, CBC, CBG, CBN as well as Delta 9 THC.”

Downtown and D2 have a 10% discount for customers with valid student IDs, as well as for veterans and seniors over the age of 65.

“Obviously, this is only for individuals aged 21 and over,” Asnani said. “If you’re a graduate student, or later in your undergrad career, and you’re over 21, in the past, you had to have a medical marijuana card.”

He added that his dispensaries are not specifically targeting students, but offering discounts to customers from the neighborhood.

“Any time of the year, if somebody has a student ID they get 10% off as long as it’s an active student ID card,” Asnani said. “We do it for the students that are enrolled at either UA or Pima. Of course, if it’s somebody from ASU, we’ll still give it to them, but the most important thing for your readers to know is, you can walk in with an ID that proves 21 and over and legally buy.”

The Springfield Auditor will examine the cannabis company selection process; ...

Infrastructure growth and development for the medical cannabis market 2018 to...

More than 40 Vermont municipalities to vote on retail cannabis this...

The strong support for the legalization of medical cannabis in Costa...