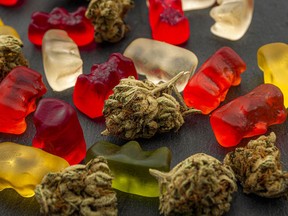 Gummy bears and other sweets are by far Canada’s number one choice for edibles; 35 percent of cannabis users prefer them. Photo by Getty Images

Cannabis-related hospital visits and accidental ingestion of the drug among children have increased in Alberta since recreational use was legalized, according to studies monitoring city health facilities.

After surveying 14 health care facilities in the Calgary and Edmonton area before and after cannabis prohibition ended in October 2018, the study found a 45 percent increase in cannabis-related hospital visits and accidental visits 77 percent increased intake among children aged up to 11 years.

Although this is a concern as their absolute numbers remain small, fears that legalization would result in significant health implications at the emergency room level have not been realized, said one of the authors, physician Dr. Eddy Lang of Calgary.

“They’re pretty worrying in percentage terms, but the actual numbers haven’t turned into a huge tidal wave,” Lang said, noting that the study concludes that three out of every 1,000 emergency room visits involved cannabis.

“We were concerned that heaven would fall with the legalization of cannabis, but that is not the case.”

Data collected from 2013 to July 31, 2019 found that 45.1 patients per week visited all emergency departments before legalization, compared to 68.9 per week after cannabis prohibition ended.

In a separate study, figures collected through March 1, 2020, after legalization, just before the COVID-19 pandemic halted surveillance, showed a 77 percent increase in accidental ingestion among 38 children and a 36 percent increase among older adolescents or 105 cases.

Of the 17-year-olds and younger in the post-legalization era, 77 were hospitalized.

It’s not clear how many of the incidents involved illegal cannabis products, which are still readily available, or legal ones, the newspaper said.

Calls to poison control centers related to cannabis use increased 87 percent after legalization.

“HealthLink did not see a significant increase in cannabis-related calls following legalization,” the study added.

But Lang also stressed that the studies, which he believes are the first of their kind in Canada, are only two pieces of the puzzle of the impact of cannabis legalization and have not been conducted nationwide.

And he said to some extent the results aren’t surprising.

“There will be some increase…we know more and more youth are using cannabis to manage their anxiety,” Lang said.

“Now that it’s legal, people are more willing to let us know about cannabis issues.”

He pointed to an analysis by Statistics Canada from about a year ago that showed 20 percent of Canadians had used cannabis in the past three months, up from 14 percent before legalization and 18 percent shortly after.

But the federal agency said it’s not clear whether these changes were solely a result of the pandemic and the resulting need for isolation.

“The significance of this increase will only be determined through regular monitoring and once significant sections of the population are vaccinated and daily routines are restored,” its website reads.

Despite concerns illustrated by the hospital numbers, Lang said the ravages of cannabis still pale in comparison when placed alongside alcohol.

“When you compare the harm we’re seeing from alcohol, there’s no comparison — alcohol is a much worse vice associated with violent events and liver disease,” Lang said.

The study also showed less mixing of cannabis with alcohol and other drugs in patients visiting emergency rooms.

Even so, emergency physicians are encountering an increase in cases of hyperemesis, a condition characterized by extreme vomiting that can be fatal, among cannabis users, Lang said.

“If someone vomits so much that they have problems with their electrolytes, it can lead to death,” Lang said.

Other medical conditions in these patients included anxiety and mood-related disorders, cardiac and respiratory distress, heartbeat and blood pressure abnormalities, cough, and chest and throat pain, the doctors said.

Some health experts have raised concerns about how the increasing potency of legalized and illegal cannabis, and its falling price, could affect medical outcomes.

Sign up to receive daily headlines from the Calgary Herald, a division of Postmedia Network Inc.

A welcome email is on the way. If you don’t see it, please check your junk folder.

The next issue of the Calgary Herald Headline News will be in your inbox shortly.

There was a problem signing in. Please try again

Postmedia strives to maintain a lively but civilized discussion forum and encourages all readers to share their opinions on our articles. Comments may take up to an hour to be moderated before they appear on the site. We ask that you keep your comments relevant and respectful. We’ve turned on email notifications – you’ll now receive an email when you get a reply to your comment, there’s an update on a comment thread you follow, or when a user you follow comments follows. For more information and details on how to customize your email settings, see our Community Guidelines.

Malta gives Materia the green light for the production and export...

Hollywood, music and sports stars come together to celebrate the growing...

Researchers are using a video conferencing app to study the memory...