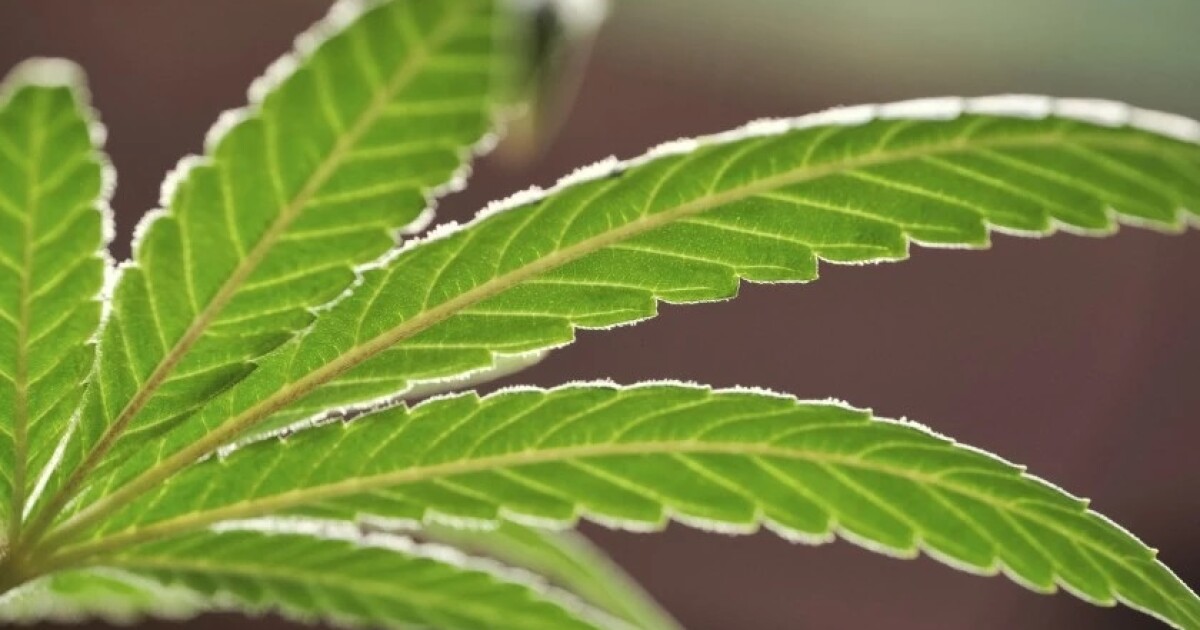 A marijuana leaf on a plant on a cannabis farm in Gardena, California in 2019.

Council members said, however, that many questions remain unanswered as to how exactly they will regulate all cannabis business activities that they must now allow following the passage of Measure H, a citizens’ initiative narrowly approved by the city’s voters in November.

These unanswered questions include what they will do to tax cannabis business activities, what steps they will take to prevent children from being attracted to cannabis use, and how to deal with complaints about noxious smells from growers.

An undisputed question is whether the city will allow commercial cannabis companies. The city’s voters voted for it when they approved Measure H. This initiative enables four retail cannabis stores to open in the city; allows commercial cannabis cultivation in greenhouses on agricultural land; and enables cannabis kitchens, distribution facilities, and product manufacturers to set up shop in some parts of the city.

The city council is expected to reaffirm the vote on Wednesday evening at its August 11th session. After that, the State Coastal Commission will review the new regulations and once that is done Encinitas can start accepting cannabis business proposals.

Get the Encinitas Advocate in your inbox

Top stories from Encinitas for free every Friday.

You may occasionally receive promotional content from Encinitas Advocate.

Measure H outlined the restrictions the city can impose on cannabis companies. In the case of retail stores, these restrictions include a requirement that a security guard be present on the premises around the clock, that hours of operation should only be between 7 a.m. and 9 p.m., and that cannabis retail stores must be 1,000 feet or more from daycare, playgrounds, Schools and other cannabis dealers away.

The city can’t make the regulations stricter than Measure H, but it has a bit of flexibility when it comes to managing its impact, city officials said. Last month, the city’s planning commission made a number of proposals, including setting up a public awareness campaign to educate residents about what is allowed, creating a map showing where cannabis companies can be, and approving an odor management ordinance for growing cannabis.

On the night of Wednesday June 16, the city council agreed to follow all of these recommendations.

“They seemed really sensible (and) geared to help us do this,” said Mayor Catherine Blakespear.

Council members also added some of their own suggestions, including revising city sign regulations to ensure that future cannabis retailers would not use cartoon characters or other advertisements that would be particularly appealing to children.

Councilor Joy Lyndes asked about the advertising restriction, saying it seemed “well-matched” with what is important to the city’s residents.

There are also plans for a cannabis tax in the works, said city manager Pamela Antil, adding that she will likely recommend putting them on the ballot next year.

While some suggestions may be workable, others likely aren’t, city officials said.

Councilor Kellie Shay Hinze asked if the city could give priority to applicants applying for any of the four retail sales permits the city will be distributing through a lottery system, but was told that the city likely cannot prioritize women’s businesses or other special categories. Councilor Joe Mosca asked if the city could give preference to small businesses, but was advised that since the city requires three years of experience from these retail outlets, this will likely eliminate any small business.

Councilor Tony Kranz, who opposed Measure H, said “big weed” companies wrote the initiative that pays people to collect signatures to put on the ballot and enables the city to do little to be able to get them up to a mandatory, three-year waiting period ends. He looked forward to the end of the three-year period and said the city should start collecting proposals to change the measure now.

The August 11th meeting, the next time the cannabis article appears, will be the Council’s first in-person meeting in more than a year due to California’s coronavirus-related health restrictions. In early June, city officials said they were hoping to make the June 23 meeting their first in-person meeting, but they have since learned that this cannot be done before the August meeting due to public notification requirements, Antil said. There are no meetings in July, as the Council is in its annual summer recess during this time.

– Barbara Henry is a reporter for The San Diego Union-Tribune

Cannabis Guide to the US and Canada – Kentucky, USA

California regulators are filing the proposed emergency provisions to implement the...

The study shows that more than half of cannabis users are...

When it comes to professional sports, cannabis as a pain reliever...

The Booming Cannabis Industry Is Still Leaving Black Americans Behind, and...