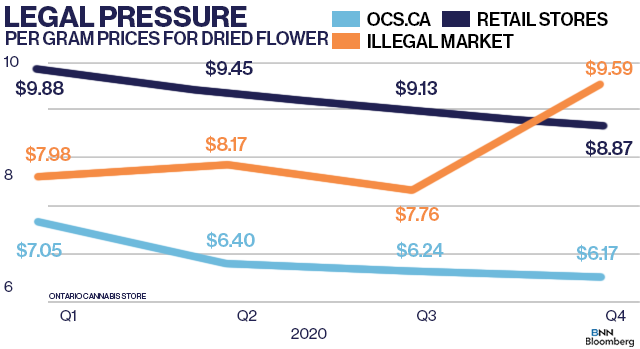 The Ontario Cannabis Store released its annual report on the state of the provincial cannabis market earlier this week. The report is jam-packed with interesting tidbits and information that will likely be sifted through by industry watchers looking for guidance on where the $ 2.6 billion cannabis market is headed. Given that federal regulators and Statistics Canada don’t provide such in-depth look at cannabis sales in the country, and given that Ontario is the largest retail market in Canada and has a very influential role within the broader industry, this report will be the best indicator of that how policymakers see the market. Simply put, Ontario’s view of the cannabis industry matters.

An interview request with the interim CEO of the Ontario Cannabis Store, David Lobo, was denied, citing the “interim” status of his position.

Here are five interesting points we were able to read from the report:

The old market persists: The OCS estimates that 44.1 percent of the province’s cannabis sales were through the legal market by the fourth quarter of the fiscal year (which ended in March 2021), with the remainder through illegal channels. That is slightly more than the 43.1 percent in the previous quarter and a sign that the transition of customers from the old market to the legal market has slowed considerably. While a bevy of new cannabis businesses are likely to continue this transition, the slower pace suggests that illegal operators will continue to thrive despite continued enforcement in the industry.

Store closings are coming (presumably): You may not be the only one wondering about the concentration of some legal cannabis stores in parts of the province, particularly in Toronto. Lobo states in its annual letter that the industry’s rapid growth “is likely to result in some retailers facing increased competition and a crowded market which could lead to some market closings and adjustments”. While some areas could benefit from a pooling of cannabis retailers according to some scholars, the province continues to take a market-based approach to retailing with no plans to limit or reduce the number of licensed cannabis stores. Lobo goes on to say that retailers “must continue to have a relentless focus on targeted consumer segments and differentiate themselves from others.”

Prices keep falling: The legal market continues to make strides in pricing, with the average price per gram sold online by OCS at $ 6.17 in late March compared to $ 7.05 in early April 2020. Meanwhile, falling the retail prices of $ 9.88 on the same time frame of $ 8.87. Interestingly, the average price for a gram of cannabis in the illegal market rose from $ 7.98 in April 2020 to $ 9.59 in late March; According to the OCS, the increase could be due to illegal sellers offering more expensive premium products and the removal of some websites that illegally sell cannabis online. When it comes to the “value” end of cannabis, however, the OCS noted that consumers are buying slightly more premium products as retail store staff are driving more people to buy higher-priced deals.

Flower continues to dominate: Despite the availability of a wide range of innovative cannabis products, the vast majority of cannabis sales in Ontario remain dried flowers and pre-rolls. According to independent analysts at The Cannalysts, about 71 percent of all sales came from these two categories. They also said in a report to customers that the dried flowers category remains competitive with retailers and manufacturers alike, while presale sales have likely increased due to “impulse / convenience purchases” in retail stores.

Does anyone like pot drinks?: Despite all the clamor, sales of most Cannabis 2.0 products continue to grow at a modest pace. Topical sales rose 12 percent quarterly but were only about $ 4.5 million for the full year. Concentrates, a category that includes products like resin, hash, and shatter, saw sales increase steadily 16 percent from the previous quarter but hit just $ 17.5 million, or about three percent of total sales for the year. More surprising was how infused beverages performed over the course of the year; While manufacturers have spent millions developing pot drinks, they represent only two percent of the total market, or $ 12.8 million in sales, and the Cannalysts report sees sales growth declining six percent for the quarter.

TOP NEWS OF THE WEEK

New York-based Clever Leaves said in a press release that it would provide $ 25 million in cannabis products to each company that is licensed to “advance scientific research into the potential medicinal benefits of cannabinoids.” The company will provide up to 250,000 bottles of pharmaceutical grade cannabis oils or five tons of medicinal cannabis flowers to research companies looking to develop new therapies. It said it has already partnered with Biopharmaceutical Research Company (BRC), a pharmaceutical manufacturing and analysis company focused on producing cannabis for researchers in the United States. BRC is one of the first groups in the US to receive approval from the Drug Enforcement Administration to grow cannabis for scientific research. Segra International independently said it completed the first export of cannabis plants from Canada to BRC, but did not disclose the size of the shipment.

U.S. Supreme Court Justice Clarence Thomas made waves across the industry earlier this week after ruling in a decision not to hear a tax appeal from a medical marijuana dispenser in Colorado that the country’s cannabis laws did not Make more sense. “A ban on the interstate use or cultivation of marijuana may no longer be necessary or appropriate to support the federal government’s piecemeal approach,” he wrote in the ruling, according to NBC News. He added that the court’s 2005 ruling, which upheld federal laws making cannabis possession illegal, may now be out of date. Raymond James analyst Rahul Sarugaser highlighted the disclosure in a notice to clients, specifically highlighting how Thomas views current federal cannabis laws as “the government.” [being now] Content to allow states to act ‘as laboratories’. ”

Apple has now allowed cannabis companies to offer mobile apps on its app store, undoing a decision made to support companies operating in markets where marijuana is considered legal. The move, first reported by TechCrunch earlier this month, means that cannabis-related apps must be restricted to areas where cannabis is legal, and that the program “must be submitted by a legal entity providing the services, and not from a single developer. “The decision will likely allow companies like Pax to offer mobile apps for users who want to connect their vape devices to an app, as well as cannabis delivery services,” reports Marijuana Moment.

Here is a roundup of some of the cannabis industry companies that released quarterly results this week:

Stifel analyst Andrew Carter takes a look at the latest headset data for the Canadian cannabis market, which accounts for roughly two-thirds of the total market. The data underscores that Canada’s cannabis industry remains increasingly competitive with more new entrants, outperformance from smaller producers, and ongoing price compression. According to Carter, sales in four Canadian provinces are expected to increase by about 91 percent in May compared to the same period last year, while sales should increase by about five percent from April. He added that he estimates annual sales in Canada should climb to over $ 4 billion this year and climb to $ 6 billion in the next two years. Interestingly, Carter notes that the Ontario retail market “has passed the point of saturation in many areas,” while the average sales per store in the province is less than $ 2 million, one of the lowest in the country. Quebec, which has a provincial-owned retail model, is at the forefront with its retail stores that have sales of more than $ 10 million annually.

$ 5.47 per gram
– This week’s price is down 1.5 percent from the previous week, according to Cannabis Benchmark’s Canada Cannabis Spot Index. At current exchange rates, this is equivalent to $ 2,008 per pound.

“I am human”
– Tweet from U.S. sprinter Sha’Carri Richardson in response to being suspended from the Olympic team for a month after testing positive for THC. Richardson said in an interview with the Today Show that she used cannabis to deal with the death of her birth mother. Richardson can compete in the 100-meter relay but does not qualify for the Tokyo 100-meter race later this month.

The White House is suspending new cannabis use workers despite policy...

Trees Cannabis will revive its downtown Victoria location as a licensed...

The pharmacy background pays off for Louisiana Dispensary

INDUSTRY LEADERS LAUNCH CANNABIS CULTIVATORS FROM BC TO